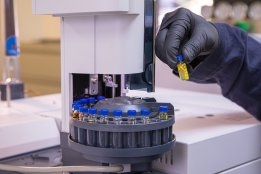 Testing firm VPS has joined FOBAS in warning of a potential bunker contamination at the Amsterdam-Rotterdam-Antwerp (ARA) hub.

VPS has detected volatile organic compounds in VLSFO samples from multiple suppliers in the ARA region from deliveries in May and June, a company representative told Ship & Bunker on Monday.

"Vessels using this fuel have reported loss of power and subsequent loss of propulsion resulting from damage to fuel injectors and fuel pumps of both main and auxiliary engines," the representative said.

"The organic compounds that were detected in this fuel are mainly phenols, styrenes, alcohols and ketonic compounds ranging up to 40,000 ppm in total."

The contamination has been detected using gas chromatography-mass spectrometer (GC-MS) testing, an advanced method not included in the standard ISO 8217 tests that the bunker industry typically relies upon.

The issue follows a separate contamination case in Singapore earlier this year in which as many as 200 vessels were found to have taken on HSFO contaminated with chlorinated hydrocarbons. About 80 vessels subsequently reported damage from the contaminated fuel.

VPS has recently argued that the current high bunker prices worldwide are more likely to lead to such contamination cases. Tight supply conditions for middle distillates could act as an incentive for fuel suppliers and others in the supply chain to blend unfamiliar components into bunker fuel, and some of the subsequent new bunker blends could prove to be harmful to engines.

Prosecutors in a Singapore court last week alleged the company delivered less bunker fuel than was agreed on at least 52 occasions between January 4, 2014 and March 2, 2016.