Over the past few years, the world appears to have moved from one crisis to the next. Most recently, the COVID pandemic causing huge global disruption and restrictions to people and businesses, followed by the recent Russia-Ukrainian conflict and concerns over the innocent loss of lives and the greater worry of potential escalating conflict.

For global shipping, both of these events have given rise to many additional challenges to which ship owners and operators have either had to overcome or continue to tackle.

One key concern for the industry is the escalating cost of fuel due, in the main, to the Russian-Ukrainian war, an issue which is also impacting upon every walk of life. For shipping, the cost of fuel has always been the major cost in relation to every single voyage and the demand for good quality fuel, at competitive prices, remains paramount, especially in these times of significantly increased costs.

However, in a recent in-depth study carried out by VPS during Q1 2022, a strong correlation between crude oil price and bunker fuel off-specs was identified. Based on data covering the past 10 years and using a huge dataset of our 1.2 million fuel samples tested during this period, a correlation can be shown, which is graphically illustrated in Graph 1: 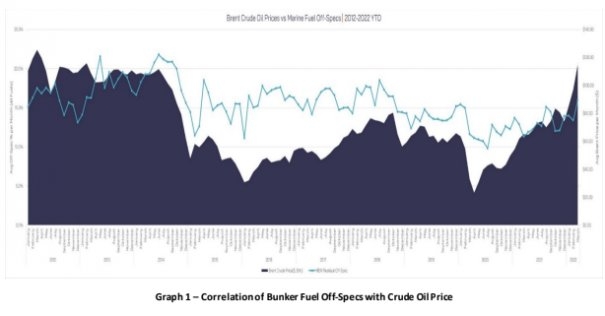 In recent weeks, VPS has seen an increase in the number of Bunker Alerts (BAs) issued corresponding with crude oil price, with a 60% increase this year versus the corresponding period in 2021. It should be noted that VPS only issues a BA when we have an off-spec parameter for 3 vessels within one week for the same port and parameter. The BAs that we have issued in 2022 have been across a range of 8 different ports for 9 different parameters and for the different bunker fuel types of VLSFO, HSFO and MGO. This suggests a general reduction in fuel quality across geographies caused by different factors and fuel types.

The Bunker Alerts that we have issued in 2022 have been across a range of 8 different ports for 9 different parameters.

A good example of the type of off-spec parameter that we have identified resulted in a major marine fuel quality issue identified in Singapore. This quality issue was in relation to chemical contamination of HSFO fuel delivered to over 200 vessels, which caused major operational problems to approximately 80 vessels. VPS led the way in identifying and quantifying the specific contaminants as several chlorinated hydrocarbons and assisted its customers in overcoming the subsequent issues of receiving and in many cases burning this affected fuel. The fuel had been supplied by two suppliers, with one actually providing the other with this contaminated product. It is alleged the first supplier blended a contaminated cutter stock to HSFO fuel, prior to it being sold.

VPS can only stress that the asset protection provided by proactive fuel management and testing has never been so important in protecting vessels from damage. Therefore, ISO 8217 testing, plus chemical screening by GCMS-Headspace analysis, additional cold-flow properties testing, such as wax appearance temperature (WAT) testing and routine fuel system checks (FSC), can provide even greater added-value to ship owners and operators, at a time of great uncertainty and increased risk, with respect marine fuel purchase and usage.

For further information on how VPS can advise and support you in protecting your
vessels, crew and the environment please contact: info@vpsveritas.com.

A Medeca cutting sulfur output from bunker fuel to 0.1% could be in force by 2025.

The company is looking for candidates with at least 15 years of experience in the energy and renewables markets.