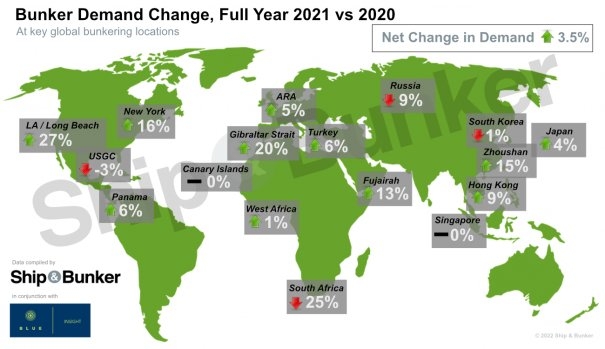 Demand at key marine fuel hubs jumped by 5.7% in the fourth quarter of 2021 from a year earlier, leaving 2021's total 3.5% higher than 2020, according to the latest survey of bunker sales volumes in 17 leading locations around the world.

As in previous quarters, Ship & Bunker and consultancy BLUE Insight surveyed bunker market participants around the world alongside official data where available and found an average jump of 5.8% in volumes in the fourth quarter from the same period of 2020. The year-on-year rise compares with an 8.2% year-on-year gain from a year earlier in the third quarter. Q4 volumes sequentially were 2.2% higher than in Q3 2021.

"Particularly noticeable was the demand returning to increasingly active major container ports as compared to 2020.

"Smaller bunker ports and locations showed less growth and even some deterioration as volume shifted back to major ports and global supply and demand balance continued to realign post-pandemic.

"Growth in China was an outlier in this data, where demand continues to set new records."

Notable in the annual data was that 2021's total was still 8.6% below the level seen for these 17 areas in 2019, meaning the effect on global bunker demand of the COVID-19 pandemic is far from over.

It should also be noted that conventional bunker sales are in a long-term secular decline, with fuel-efficiency measures and the gradual shift to alternative fuels taking away more conventional sales with every year that passes.

Under these circumstances and the supply challenges caused by Russia's invasion of Ukraine this year, a sharp jump in global bunker demand back to 2019 levels in 2022 looks unlikely.

Demand varied across the shipping segments. The container market is still running at essentially full capacity with current abnormally high freight rates, although its bunker needs did not grow hugely over the course of 2021. Bulker demand increased sharply over the year, while tanker demand dropped off. The cruise industry has finally restarted its activities, but its demand remains significantly below pre-COVID levels.

Carsten Ladekjær, CEO of Glander International Bunkering, told Ship & Bunker his firm had seen significant variation of demand around the world at the end of 2021.

"Looking at our regional demand, the picture quite differs from region to region.

"For example, in SE Asia we saw a strong decline, whereas we saw very strong growth in NWE.

"We saw a small growth in the MED, the Middle East was relatively flat and we saw medium growth in the US WC, Canada and Central America.

"Some of the changes, especially in SE Asia, can surely be attributed to COVID ripple-effects when you are comparing such relatively short supply windows."

Together these areas saw 138.5 million mt of demand in 2021, meaning they cover more than 60% of current global demand.

The full breakdown of the survey results including sales volumes in each bunkering region for the whole of 2021 and 2020 as well as individual quarters, is available for subscribers by clicking here.

Calm Before the Storm

BLUE Insight's Tolson said the market moves seen at the end of 2021 may seem small compared to those expected from the first quarter onwards as a steeper decline in demand hits and the impact of the Russian invasion of Ukraine starts to make itself felt.

"I think it's a bit of calm before the storm," he told Ship & Bunker.

"If we look at Panama and Singapore's 2022 figures, it seems lower demand approaches, and then March should be very interesting."

But Glander's Carsten Ladekjær said the current volatile state of the market may bring benefits for some firms.

"What we're seeing right now in Q1 2022 is a surge in demand towards larger reputable trading houses," he said.

"This is caused by the high oil prices, the exodus of finance and the increased complexity in our industry.

"As a result of this, Glander International Bunkering has experienced an increase in the number of quotes made & stems fixed with customers during Q1." 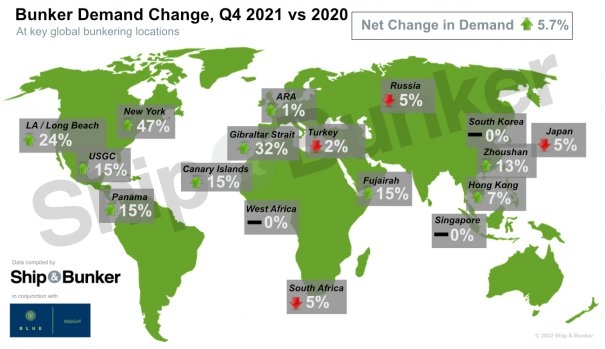