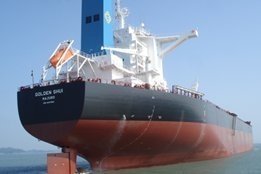 "They are willing to pay a premium but not necessarily the premium you want to see if you look at the spread in the fuel prices," Golden Ocean Group Limited (GOGL) CEO, Birgitte Vartdal, said Thursday during the firm's latest earnings call.

"Mainly the fixtures that we have seen have been a fixture on the time charter rates but with a profit split, for instance, on the scrubber, so that the charterer gets 50% and the owner gets 50%. Or, some with a fixed rate, but then not getting the full benefit."

Nevertheless, Vartdal says she is still expecting GOGL's scrubber equipped tonnage to significantly impact its earnings potential in the run up to January 1 when prices for IMO2020 grade low sulfur fuel are likely to be high.

One of the barriers for operators achieving the savings from scrubbers is their ability to lift cheaper HFO, something that has been far from certain once the new global 0.50% sulfur cap comes into force.

GOGL this week addressed this by joining forces with Trafigura and Frontline on a bunker supply operation it hopes will be one of the world's leading suppliers of marine fuels.

At the very least, Vartdal said Thursday it will ensure they have "prompt access" to both high sulfur fuels and compliant fuels.

"Setting aside the economic opportunity, we have either created a further competitive advantage or at least protected ourselves against the significant potential risk," she said.

Viking Line to Start Resuming Passenger Services From Next Week

The company plans to restart operations at a 'cautious' pace.