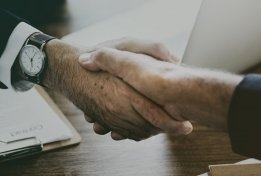 This move will give the new entity "increased base volumes and greater access to both infrastructure and credit", the trading house said in a statement.

Frontline and Golden Ocean are to have a 15% and 10% interest respectively in the joint venture while Trafigura will contribute its existing, physical bunkering activities.

The joint-venture will act as the exclusive purchaser of marine fuels for Trafigura, Golden Ocean and Frontline, as well as certain entities affiliated with Industry sources have told Ship & Bunker that Trafigura have made a number of heavyweight hires for the project and are eyeing volumes that would put them among the top global bunker players, although the company has yet to make an official comment on the scale of its ambition., Golden Ocean and Frontline's largest shareholder.

"We are confident in our ability to supply quality products at competitive prices to the fleets controlled by the JV partners as well as to third party shipowners and operators," Kenneth Dam, Trafigura's co-head of bunkering, said in the statement.

It will start operating during the third quarter.

The announcement comes after a period of significant growth and investment by the commodity giant within the bunkering space, and industry sources have told Ship & Bunker that Trafigura has made a number of heavyweight bunker industry hires in recent times. If the chatter is to be believed, the firm is eyeing volumes that would put it among the world's largest bunker players.

The move also reflects current thinking on the impact of the coming 0.5% sulfur cap on bunker fuel on the bunker sector.

One bunker trader with a medium-sized firm said the announcement is indicative of the industry's direction of travel. "Bunkers are seen as a profit centre. That never used to be the case," the trader said.

"The entrance of big well-financed players will inevitably make it harder for the smaller firms," he added.

Total bunker demand at the Turkish port has slipped to just under 200,000 mt/month so far this year, down from around 250,000 mt/month two years ago.