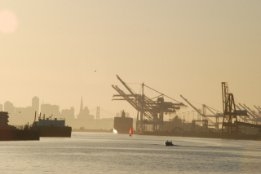 The violations were discovered during routine audits of the company’s 2017 and 2018 vessel fleet visits to the Port of Oakland.

"CARB’s investigation revealed that from 2017 to 2018, Mitsui O.S.K. Line’s Oakland fleet did not meet the three-hour diesel engine operational time limits, and did not reduce auxiliary engine power generation by 70 percent as is required," CARB said in a statement.

The $253,300 penalty charge was paid into the Air Pollution Control Fund to support efforts to improve air quality, CARB added.

The rule, which has tightened over the years, has achieved an 80% reduction in harmful emissions from more than 13,000 vessel visits since 2014, according to CARB.

The latest iteration of the rule was introduced last month and adds new vessel categories that are required to comply with the regulation, including car carriers and tankers.

The buoy will be tested in the second half of 2021 to charge smaller battery-powered or hybrid-electrical vessels overnight.