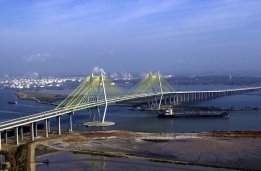 Houston was the source of a global bunker contamination crisis in 2018. File Image / Pixabay

The contamination in HSFO seen in Singapore in recent weeks may have spread to Houston.

Several testing agencies have reported finding chlorinated hydrocarbons in Singapore HSFO samples in recent weeks. On Wednesday Singapore's MPA said Glencore was the original supplier, with more deliveries then made by PetroChina, about 200 ships receiving the fuel in total and about 80 reporting problems with fuels pumps and engines afterwards.

A Glencore representative declined to comment on the report when contacted by Ship & Bunker on Tuesday.

If the contamination has spread to Houston, it is likely to take much longer for the problem to be resolved than with a localised crisis. Comparisons have already been made between Singapore's recent problem and the worldwide contamination crisis that stemmed from Houston in 2018.

The company is looking for candidates with at least 10 years of experience in commodity trading and with senior management experience.

Wilson Tang has joined the firm as a senior bunker trader in Singapore as of this month.

The centre's aims closely align with Carnival's own goal of net-zero emissions for its ship operations by 2050.