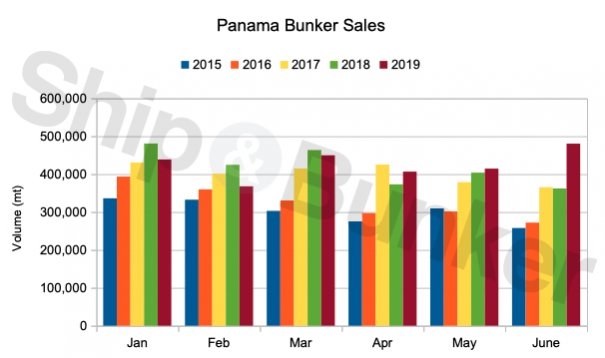 The latest official data from Panama Maritime Authority (AMP) have an upward correction for every month in the first half of 2019.

The revised figures now mean April, May, and June 2019 all have higher totals than the respective period in 2018.

It was previously reported that June was the only month in H1 2019 with a year-on-year improvement.

Another change is that the dramatic surge in bunker sales volumes in June, which was previously understood to have hit a 15-month high of 430,583 mt, was even higher than previously thought.

The revised June sales total of 480,464 mt is now the highest since January 2018 and only 303 mt short of being the port's best month on record.

As for why the revision was made, an AMP spokesperson told Ship & Bunker it had recently received previously omitted sales data from a supplier operating in the market.

"The information was sent from the month of January to the end of July 2019. This increases the values for all months," they said.