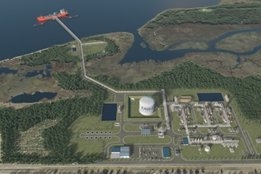 Construction cost of the facility is estimated at approximately $500 million.