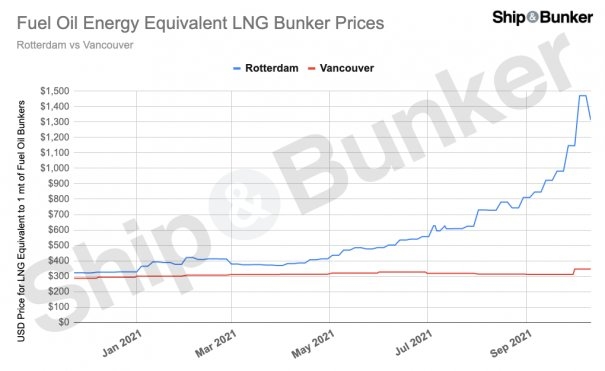 Shipowners with gas-powered tonnage calling at Vancouver in future could be able to avoid the global gas market spike that has seen LNG bunker prices at some locations more than quadruple this year.

One of the complexities when comparing alternative bunker fuels both with each other and their traditional oil counterparts, is that the fuels typically have different energy densities. To ease the understanding for industry stakeholders Ship & Bunker publishes its bunker prices both in terms of the raw commodity and its energy equivalence with traditional fuel oil and MGO bunkers. (click here to learn more)

Looking at the price of LNG bunkers in fuel oil equivalent terms - that is, the price for an amount of LNG with energy equivalent to 1 mt of fuel oil bunkers - we can see a spread that last week peaked at more than $1,100/mt has opened between Vancouver and Rotterdam.

When the global prices start shooting up, we start looking very, very competitive.

This week that spread narrowed slightly, with LNG bunkers priced in fuel oil terms at Vancouver standing at $346.50/mt on Monday, according to Ship & Bunker indications sourced from local gas supplier FortisBC, compared with $294/mt at the start of the year and an average in 2021 of $314.50/mt.

Such a spread in global oil bunker prices is unheard of, and for comparison VLSFO saw a spread of $277/mt on Wednesday (October 13) ranging between St Petersburg's price of $551/mt and Gladstone's $828/mt.

Global gas prices have shot up in recent months in response to a hot summer in Asia and expectations of a cold winter in Europe, both of which mean higher-than-usual demand.

"The five-month average futures prices for the Korea/Japan LNG Marker Futures for the upcoming winter was US$40 on October 6.

"This is seven times the recent US Henry Hub price, and ten times that of [BC's neighbouring Canadian province of] Alberta's AECO benchmark."

The biggest variable in our cost structure is the commodity index, but the rest of the components are fairly predictable and stable

The commodity cost component of FortisBC's LNG is tied to production basins such as Station2 in British Columbia and the AECO hub in Alberta. These regional gas hubs are somewhat disconnected from the recent price rally witnessed in the global gas market hubs, meaning current low storage levels in Europe have not resulted in a spike in its prices.

Some exports have started from the region, with Malaysian gas firm Petronas pricing a cargo on AECO terms earlier this year, but exports coming in sufficient quantities to tie the AECO prices to the global gas markets seen as unlikely in the near term.

With limited numbers of vessels in the global fleet currently able to burn LNG, LNG bunker supply at Vancouver is understandably still at a nascent stage. There is no delivery vessel or jetty yet, but the market is in development.

Truck-to-ship deliveries have been running for several years, with FortisBC having carried out more than 3,000 such operations to date thanks to their relationship with BC Ferries. The local ferry operator has one of the world's largest ferry fleets and has been an early adopter of LNG after making its first order for gas powered tonnage back in 2013.

"The upside is when the global prices start shooting up, we start looking very, very competitive," Ramakrishnan said.

"Our prices are a lot more stable and predictable, and provide more certainty to the shipping line."

The way the FortisBC liquefaction facility and costs are regulated is also an advantage for buyers, Ramakrishnan said, with liquefaction and other fees fixed and publicly available.

"The biggest variable in our cost structure is the commodity index, but the rest of the components are fairly predictable and stable."

As at today, the wide price spread will be something of a moot point for ships unwilling to make the journey to Vancouver for LNG truck deliveries -- most of the market -- but it highlights how the shipping industry's shift into alternative fuels may occasionally put it in unusual market conditions.

In the conventional bunker market, dominated by shipping and located at ports where global arbitrage soon erodes price advantages, spreads along these lines have almost never been seen, but in the more unfamiliar territory of alternative fuels with other industries competing for them, conditions may well turn out to be more volatile.

The firm is looking for candidates with an academic qualification at masters level in a quantitative discipline.