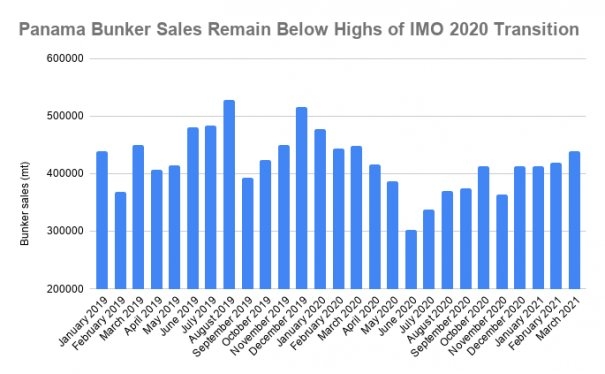 Panama's bunker sales are climbing, but remain below the level seen at the start of 2020. Image Credit: Ship & Bunker / Data Credit: AMP

Bunker sales volumes in Panama reached the highest level in a year in March.

Total sales reached 439,028 mt in March, according to data from the Panama Maritime Authority, the highest level since the same month a year earlier. The total was down by 2% from March 2020 but up by 4.9% from February's level.

Global bunker sales have been rallying from last year's lows as the shipping industry swerved a prolonged slump from the COVID-19 crisis. Bunker volumes at the world's largest hubs sank by 6.3% overall last year, according to Ship & Bunker and BLUE Insight's quarterly survey.

The organisation has signed a memorandum of understanding with energy services company Stabilis Solutions to facilitate the use of LNG as a bunker fuel at the port.

The presence of solvent chemicals in a ship's fuel could lead to poor combustion and lubrication, fuel pump seizures and damage to piston rings and engine liners.