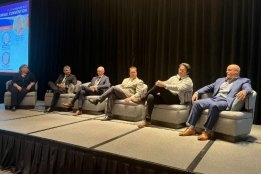 The discussion arose in a panel session at the IBIA Annual Convention 2022 in Houston last week. Image Credit: IBIA

A panel representing the Americas bunker markets at the IBIA Annual Convention 2022 last week expressed scepticism over the need for supplier licensing and mass flow meters across all markets there.

Panelists at the Houston-based conference said the need for these regulatory developments was less urgent in the Americas, both because quantity disputes were less common and because of the difficulty of legislating for them across multiple US states.

Bunker industry body IBIA is making a push for a more global rollout of supplier licensing and MFMs a key focus over the next year. Singapore has had these measures in place for several years, and they are thought to be an important part of improving the industry's standards.

"I think if we look at North America, it's not a place where there are any issues with quantity disputes, so I think it would be overkill to put it on," Rasmus Jacobsen, Americas managing director at Monjasa, said.

"We discussed this at the IBIA regional board meeting as well, looking at whether it makes sense.

"Licensing in the US would be complicated to get through.

Flavio Ribeiro, CEO of Bunker One Brazil, said MFMs were working well on a voluntary basis for energy producer Petrobras.

"When you look at mass flow meters, Petrobras made a decision years ago to make this a requirement in Brazil for their operation," he said.

"I think it provides an extra layer of offer to the market in Brazil, but it's not mandatory.

"We do see a need for licensing in Brazil, that's something we have advocated very much.

"In order to call yourself a fuel supplier, you need to have proper management."

Frank Ray, bunker sales specialist at GCC Supply & Trading, said factors like regular US Coast Guard inspections of barges made the US Gulf market a high-quality one already without further need for regulation.

"The US is pretty advanced," he said.

He also suggested MFMs would not be a popular addition to the market.

"We already have a mass flow meter on one of our barges; we don't use it, because we don't have quantity discrepancies," he said.

"There's just a reality that it does reduce the flow rate, so if you're trying to do a container ship, that's 20,000 metric tonnes; if you cut your flow rate, well, time is money."

The installation of a mass flow meter can reduce a barge's flow rate by as much as 50%, he said.

Meanwhile, the countdown for the Russian price caps implementation has begun.

Steve Bee of global testing firm VPS sets out how bunker fuel screening can be deployed to avoid fuel-quality problems.

Almost every discussion at last week's convention ended up turning to the theme of decarbonisation before long, and speakers said the current downturn was not yet sharp enough to postpone the green transition.