BC Ferries Passes on 1.5% Fuel Rebate to Customers as Bunker Prices Slump 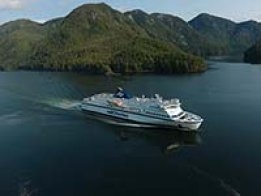 BC Ferries customers are about to see a reduction in prices. Image Credit: BC Ferries

Shipping company BC Ferries plans to pass on a 1.5% fuel rebate to its customers after the recent drop in bunker prices, the company said Thursday.

"BC Ferries closely monitors the price of fuel and applies a rebate or surcharge, or neither, under a regulatory process that is independent of fares," the company said in a statement on its website.

"The recent decrease in the price of fuel allows BC Ferries to introduce a 1.5 percent fuel rebate."

Average very low sulfur fuel oil prices have dropped by 38.5% since the end of Feburary, according to the Ship & Bunker G20 index of prices at 20 leading bunker ports.

The rebate will be in effect from April 1, BC Ferries said.

Analyst sees differential moving from $200 to $100 by next year.