Petrobras: Lower Viscosity Fuel at Rio Ahead of IMO2020 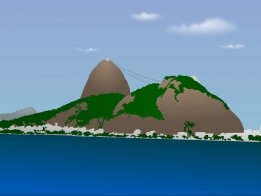 To make sure its product meets the 0.5% sulfur stipulation for bunker fuel from January 1, Brazilian bunker supplier Petrobras has said it will be running tests at its refinery, Refinerie Duque de Caxias.

The company has advised buyers that an effect of these tests could be lower viscosity in the bunker fuel at the port of Rio de Janeiro.

"During the period of tests, the marine fuels to be offered in the port of Rio de Janeiro most likely will contain a lower viscosity," the company said in a statement.

And it added that while the ISO 8217:2005 [bunker fuel specifcation] in the port of Rio de Janeiro is guaranteed, because of the period of testing, the company is "not able to know precisely the viscosity of the products beforehand".

The company expects to own and operate six vessels running on ammonia by 2030.

The ships will be owned by Continental Bitumen and operated by Tipco Asphalt.