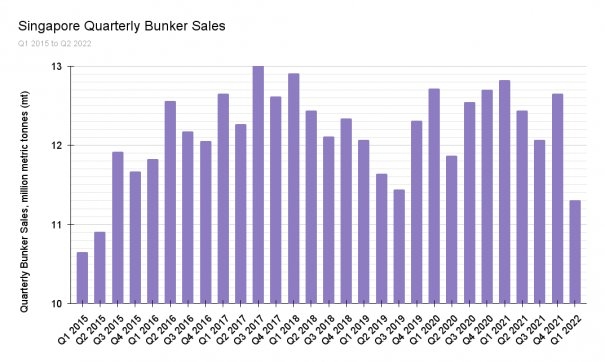 Singapore's sales are continuing to decline after hitting the lowest level since 2015 in the first quarter. Image Credit: Ship & Bunker / Data Credit: MPA

Bunker demand in Singapore declined on both a yearly and monthly basis in April as contamination problems and the ongoing Russia crisis hit sales at the world's largest marine fuels hub.

The city-state's total demand slipped to 3.7 million mt in April, according to preliminary data from the Maritime and Port Authority, down by 12.1% from the same month a year earlier and by 0.7% from March's level.

The total was dragged down on a monthly basis by HSFO sales after 80 ships reported damage from buying contaminated HSFO in Singapore in February and March.

Singapore's sales are continuing to decline after hitting the lowest level since 2015 in the first quarter. The contamination problems in February and March will have played a large role in the decline, but the steady phasing out of Russian oil since the invasion of Ukraine in late February may also be a factor in its underperformance.

The average stem size last month was about 1,237 mt.

There were 3,025 vessel calls for bunkers in April, 0.2% higher than the level seen a month earlier. That left the average stem size last month at about 1,237 mt, compared with the 12-month average of 1,273 mt.

The total gross tonnage visiting Singapore dropped by 6% on the year to 240 million mt. This decline was led by the bulker segment, which lost 6.8 million mt, and by a 3.7 million mt drop in tanker tonnage. 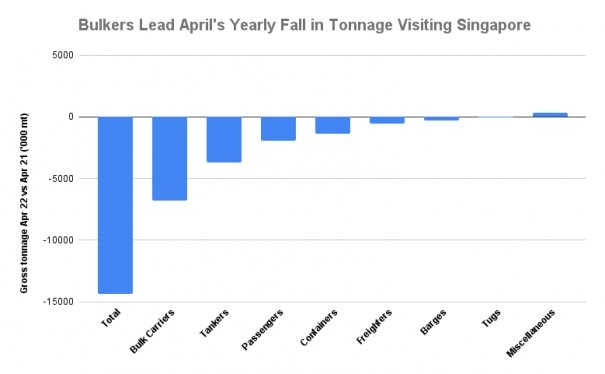 The partnership will explore the feasibility of setting up a synthetic methanol plant with output of at least 50,000 mt/year.

The greatest challenge in detecting chemical contamination is the many thousands of organic compounds that exist which may contaminate marine fuel.