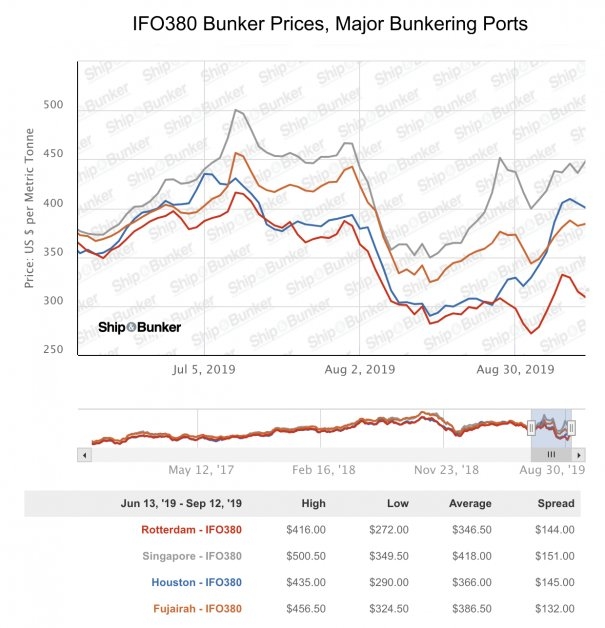 Singapore bunker sales have fallen to a three and a half year low following an extremely volatile month for bunker prices.

The latest preliminary data from the Maritime and Port Authority of Singapore (MPA) shows total sales in August for all products was 3,668,900 mt, the lowest since February 2016.

IFO380 sales made up almost 74% of the total, the highest proportion since December 2017

Data from Ship & Bunker shows pricing for key grade IFO380, which makes up over 70% of Singapore's overall sales volume, started the month at $82/mt over Rotterdam. By the end of the month the spread had widened to $139.50/mt.

Despite the upcoming IMO2020 rule effectively ruling out HSFO consumption by most vessels next year, there was no evidence of any shift to lighter, lower sulfur material.

The world's biggest bunkering port also saw 3,423 calls for bunkers during the month, a seven month high and surprisingly strong given the low overall sales volume.

Correction: A pervious version of this story incorrectly stated 500 cSt material was 20% of the total sales

Some 55 suppliers were licensed at the port at the start of 2019.