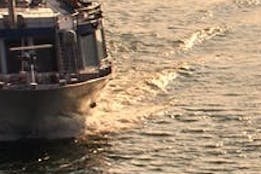 An all-electric cargo ship has been launched in Guangzhou. File Image / Pixabay

A 2,000 metric tonne (mt) all-electric cargo ship set to run in the inland section of the Pearl River has been launched in Guangzhou, China - hailed as the first of its kind to be fully powered by a lithium battery, Chinese media reports.

The ship is said to have battery energy of about 2,400 kilowatt hours and capable of speeds of up to 12.8 km per hour.

"As the ship is fully electric powered, it poses no threats to the environment. The technology will soon be likely ... used in passenger or engineering ships," said Huang Jialin, Chairman and General manager of Hangzhou Modern Ship Design & Research Co - the firm that designed the ship.

The ship, which is a zero-emission vessel in itself, is set to transport coal for the generation of electric power.

"The cost of electric power is less than that (of) traditional fuel. The main cost of the new energy cargo ship depends on how much lithium battery it is equipped with," said Chen Ji, general manger of Guangzhou Shipyard.

"Theoretically, the fully electric-powered ship could have more capacity in cargo loading. If it is equipped with larger energy batteries, it will carry goods of more than 2,000 tonnes"

The company saw net profit of $48.1 million from its marine division in Q3, up by 12.4% from the same period a year earlier.