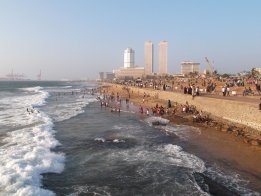 Colombo offers a significant HSFO discount compared to other ports in the region. File Image / Pixabay

High sulfur fuel oil was available at Colombo at a $99/mt discount to Mumbai's level on Wednesday, according to Ship & Bunker pricing, compared with a $3/mt discount at the start of the month. VLSFO delivered at Colombo was $7.50/mt more than at Mumbai on Wednesday.

"We can always remain competitive in the region," a company representative told Ship & Bunker by email this week.

The company is sourcing its 180 CST 2% sulfur fuel oil from the Ceylon Petroleum Corporation (CPC) refinery in Sapugaskanda, is currently selling about 3,000 mt/month and hopes to increase that figure to 5,000 mt/month.

"Given the upward trend in oil prices and given that we have negotiated attractive pricing from CPC, we believe we could maintain the discount," the representative said.

"We see most of the new container ships being built with exhaust gas cleaning systems.

"We also envisage that other vessels may also follow the same in order to get the advantage of the price, as the differential is continuously improving compared with VSLFO pricing."