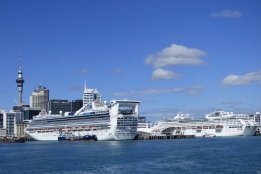 With the new IMO2020 rule looming, New Zealand's position on MARPOL Annex VI is causing uncertainty and confusion for the country's domestic shipping and bunker industries, according to local media reports.

The country is not currently a signatory to MARPOL Annex VI so has no obligation to enforce the new 0.50% sulfur cap on marine fuel that comes into force from January 1, 2020. It is also not expected to produce compliant IMO2020 grade fuels domestically any time soon.

But as sources speaking to the New Zealand Herald point out, most of the ships calling at the country including those operating within in cruise sector, are expected to comply with the new IMO2020 rule. Unless suppliers bring product in from another market, those ships will be forced to lift fuel elsewhere.

Adding to the uncertainty is that the country is considering whether it should sign up to Annex VI after all. New Zealand's Associate Minister of Transport says she is "keenly aware" of the uncertainly this indecision is causing and is set to make a recommendation on the matter in the coming months.

Local ports along with Refining NZ say it would like to delay signing up until 2023, arguing that the move could increase freight costs and have "significant implications for the economy."

In the meantime, exactly what fuels will be available in New Zealand looks set to be uncertain.

"Fuelling up here could be a problem because the fuel industry has not made low sulfur fuel available in New Zealand, with the exception of marine gas oil," the Herald quoted Kevin O'Sullivan, chief executive of the New Zealand Cruise Association, as saying.

One analyst believes oil demand is headed toward contraction.