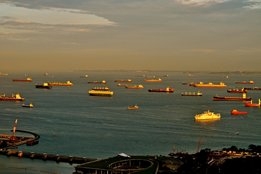 The stockpile of IMO2020 grade bunker fuel sat in tankers off-Singapore and Malaysia is continuing to grow.

Data from market intelligence firm Kpler indicates that more than 30 tankers are now anchored up in the region ahead of the new global 0.50% sulfur cap on marine fuel, Bloomberg reports.

As at October 16, Kpler data indicates there is almost 6 million mt of fuel in floating storage off Singapore, and 75% - almost 4.5 million mt - of that is IMO2020 compliant.

The offshore fuel stockpile has also grown 16% since October 4.

While this volume is enough fuel to keep even some major ports stocked for a year, Singapore is by far the world's biggest bunker market and typically sells over 4 million mt of bunkers per month.

The firm's new office will be led by Kelsey Ware, the company's trading director for the Americas.