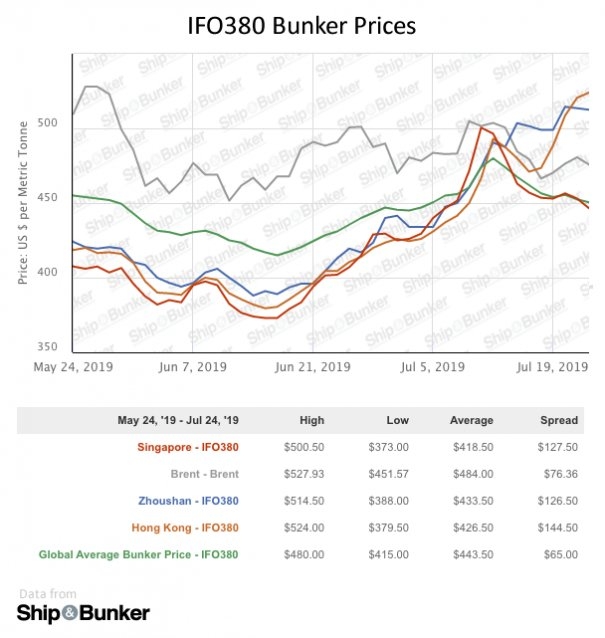 Early pressure from IMO2020 has been evident once again this week, with HSFO in some markets now selling at a premium to Brent as spreads between ports in Asia widen.

After Ship & Bunker reported last week that tight HSFO supply in Singapore had widened the spread with Rotterdam to new highs, the lack of product is now being felt in related markets within the region.

Data from Ship & Bunker shows prices for IFO380 in Hong Kong Wednesday hit $524/mt, representing a premium of $77.5/mt over Singapore and a 10% premium over Brent. Pricing between the two ports is more typically within $10/mt.

The premiums are in addition to the fact that bunker prices in Singapore remain high, with IFO380 priced at $445/mt Wednesday are at a discount of only 7% vs Brent.

Market participants do not expect the situation to change for at least another month but exactly how the market responds remains to be seen. Late Q3 and early Q4 is also be the point when buyers are expected to begin their fleet-wide transitions to IMO2020 grade products ahead of the global 0.50% sulfur cap coming into force from January 1, 2020.

"The market is massively backwardated with only three to four months left to destock HSFO, so why bother? Better to just bunker low-sulphur fuel oil already and go early", Argus quoted one bunker buyer as saying.

Croft says "green shoots of recovery" are in place.