Malaysia to Get LNG Bunkering Simulator 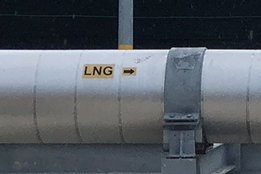 Interest in LNG as a marine fuel is growing. File Image / Ship & Bunker

Malaysia-based Kasi Group is set to launch an LNG bunkering simulator in the country.

In what is said to be a world first, the simulator is expected to have a global release some time next month.

“The (simulator) developer will be flying in to Sabah and we will do the global release of the LNG bunkering simulator here – believe it or not – here in Kota Kinabalu,” Kasi Group Executive Director Benjamin Nair was quoted by local media as saying.

With LNG slowly gaining traction as a future marine fuel, Malaysia has also set its sights on being a regional LNG bunker hub.

Nair made the announcement on Wednesday at the 7th Sabah Oil and Gas Conference and Exhibition.

Among its other activities the firm has tug boats simulators, an integrated bridge system, and is investigating the use of augmented reality for ship maneuvering simulators.

Bunker demand in Singapore has seen a small decline for the second month in a row.