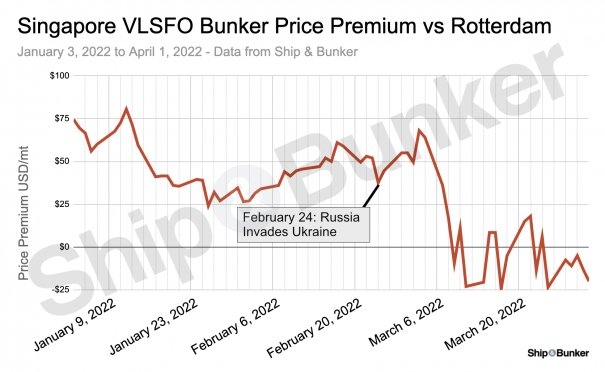 The shunning of Russian oil since the invasion of Ukraine last month has seen a fundamental shift in bunker markets, with Singapore now rivalling Rotterdam as the world's cheapest major marine fuels hub.

Gibraltar and Malta have also seen much larger VLSFO price gains than Singapore over the same period.

Bunker prices in Northwest Europe benefited from being closest to the Russian Baltic exports -- and therefore cheapest -- with prices gradually getting more expensive as the product flowed from there to the south and then eastwards.

With these deliveries being slowed or stopped altogether by the Western reaction to the invasion of Ukraine, Europe is now facing shortages to a greater extent than other regions, Adrian Tolson, head of consultancy BLUE Insight, told Ship & Bunker on Wednesday.

"The standard arbitrage of cargoes has been blown apart by this right now," he said.

"Russian fuel is no longer flowing into Europe in the same way -- not to mention that people don't want to buy it -- so there is a shift going on.

"Singapore is suddenly highly competitive, becoming cheaper than Rotterdam, and is holding that level at the moment.

"This is completely uncharted territory for those markets."

The bunker markets are now likely to see an eastward shift in demand as a result of these price changes, according to Tolson.

"Everyone wanted to maximise bunker purchases in Rotterdam because Rotterdam was the cheapest location," he said.

"While there is an amount of inelasticity in demand in the Rotterdam or ARA market, there's no question that it will lose some of that peak demand.

"I'm guessing Rotterdam's Q1, or even Q4 of last year, is going to be the peak of its bunker demand for the next year or two."

The partnership will explore the feasibility of setting up a synthetic methanol plant with output of at least 50,000 mt/year.