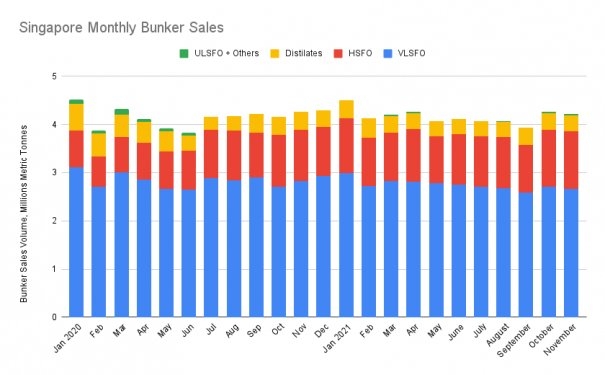 Bunker demand in Singapore, the world's largest marine fuels hub, declined on both a yearly and monthly basis in November.

The city-state's total demand slipped to 4.2 million mt in November, according to preliminary data from the Maritime and Port Authority, down by 1% from the same month a year earlier and by 0.8% from October's level.

The average stem size last month was about 1,315 mt.

The demand figures show signs of a cooling-off after a strong month of sales in October. October's total was a five-month high, and saw the biggest month-on-month improvement since July 2020.

Singapore's year-to-date total was 45.8 million mt, up by 0.6% from the same period a year earlier and looking likely to beat last year's total of 49.8 million mt once December's figures are added.

There were 3,211 vessel calls for bunkers in November,1.5% higher than the level seen a month earlier. That left the average stem size last month at about 1,315 mt, compared with the 12-month average of 1,264 mt. 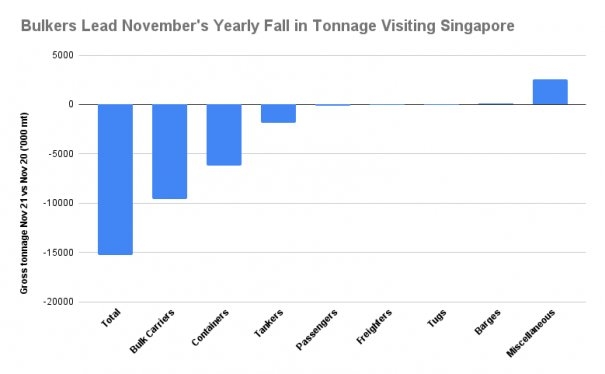 The total gross tonnage visiting Singapore dropped by 6.2% on the year to 231 million mt. This decline was led by the bulker segment, which lost 9.6 million mt, and by a 6.1 million mt drop in container tonnage.

The company is looking for experienced mechanical or marine engineers for the role.

The two firms will work together to develop and expand the Bunker Connect platform through a new joint venture.