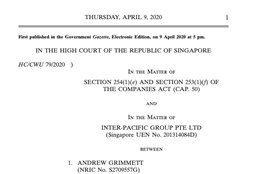 The order was made on March 27, 2020. Image Credit: High Court of Singapore

Inter-Pacific Group (IPG), the parent of the former top 20 Singapore bunker supplier and bunker craft operator Inter-Pacific Petroleum Pte Ltd, has been served a Winding Up Order by the High Court of Singapore.

The order was made on March 27, 2020, a notice published Thursday in the Electronic Edition of the Government Gazette said.

"All creditors of the abovenamed company should file their proof of debt with the Liquidators who will be administering all affairs of the company," the notice adds.

"All debts due to the abovenamed company should be forwarded to the Liquidators."

Inter-Pacific endured a torrid 2019 with the Maritime and Port Authority of Singapore (MPA) suspending its bunker craft operator licence in June before being cancelling it in October, and then losing its bunker supplier licence in December.

CLIA: "Hope and Optimism" for Cruise Sector in 2021