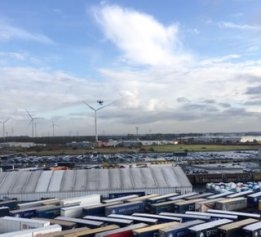 Drone in operation at Belgian port of Ghent. Image credit/S&B

A Singaporean start up wants to use drones to take cargo to ships.

F-Drone has "large-scale and on-demand aerial deliveries" in its sights, according to co-founder Nicolas Ang as quoted in the Drone Life publication. The company is developing "a drone that can deliver 100kg over 100km to ships and offshore platforms", he said.

A drone with that capacity should be in place by the end of next year while its current prototype can carry 5kg over 50km.

The Singapore government is prepared to back commercial drone development.

"In Singapore, the Civil Aviation Authority of Singapore and Maritime Port Authority conceptualized a Maritime Drone Estate, a sandbox where we first started our first trials," Ang said.

"Besides the maritime opportunities, Singapore's unique and challenging environment also mean that any drone solution that could work here, would also have a good likelihood of succeeding elsewhere."

An organisation, the Singapore Unmanned Aircraft System (UAS) community, has been set up to represent and serve the interests of the emerging UAS industry.

Drones are already in evidence in the martime sector. Danish tech company Explicit uses drones to collect samples from ships' exhaust while the technology (pictured) is used by ports to check space.

From now on the company will supply 0.1% sulfur MGO at Keelung.

The vessel will be refuelled by Total's purpose built 18,600 m3 capacity Gas Agility.