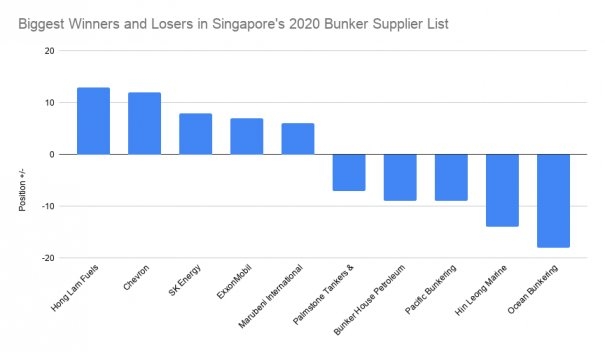 Global energy major Shell has been named as Singapore's top bunker supplier by volume in 2020, with the demise of Hin Leong subsidiary Ocean Bunkering Services appearing to benefit a number of the largest global oil firms.

The official ranking is provided annually by Maritime and Port Authority (MPA). While the exact volume of bunkers sold is known to MPA, it is not published.

Inevitably the biggest decliner on the list was Ocean Bunkering, plummeting from third place down to 21st after fraud allegations hit its parent company earlier this year. The company is in the process of being wound up, and its bunker licence is currently suspended.

Another company from the same parent, Hin Leong Marine International (Pte) Ltd, dropped from 17th place to 31st on the list.

2020 also saw two firms drop off the list. Brightoil Petroleum (Singapore) Pte Ltd's demise had been long foreseen, with its parent company having sold off its bunker barge fleet and refocused on the upstream oil business, and it had only taken 44th place in 2019's list as it carried out the last of its bunker operations early in 2019.

But the departure of Seven Seas Oil Trading Pte Ltd came as more of a surprise when it quietly disappeared from Singapore's accredited bunker supplier list in April. The firm was the 19th largest supplier in 2019, and has risen as high as 13th place in previous years.

All Singapore Bunker Suppliers Ranked by Volume for 2020

The firm's in-house bunker and lubricant analysis laboratory will now use its new Bunker Hub system to hold its data.

Shum Chum has resigned as executive director as of December 24.