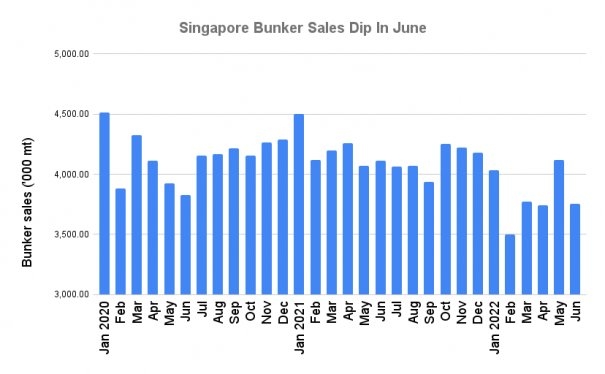 Last-month's total was nearly as low as February's, which was the least since February 2015. Image Credit: Ship & Bunker / Data Credit: MPA

Bunker demand in Singapore, the world's largest marine fuels hub, sank on both a yearly and monthly basis in June, leaving the first-half total at the lowest half-yearly sum since 2015.

The city-state's total demand dropped to 3.8 million mt in June, according to preliminary data from the Maritime and Port Authority. The total was down by 8.7% from the same month a year earlier, by 8.8% from May's level and only slightly above the 3.5 million mt seen in February, which was the lowest since February 2015.

Prices in Singapore surged last month as its VLSFO supplies dwindled. VLSFO averaged $1,107.50/mt in Singapore last month, according to Ship & Bunker prices, up from $932.50/mt the previous month, and its premium to Rotterdam widened by $80/mt to $181.50/mt.

June's numbers brought Singapore's first-half 2022 total to 22.9 million mt, the lowest half-yearly total since the first half of 2015. This year Singapore's bunker market has been under siege from continuing COVID lockdown effects in Asia, an HSFO contamination problem in February and March and now supply issues caused by the Russia-Ukraine crisis. 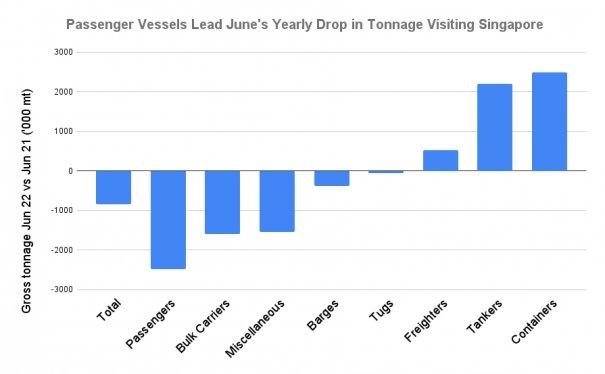 The total gross tonnage visiting Singapore slipped by 0.4% on the year to 230.6 million mt. This decline was led by the passenger segment, which lost 2.5 million mt. Bulker tonnage calls fell by 1.6 million mt, while tankers gained 2.2 million mt and containers rose by 2.5 million mt.

INTERVIEW: 'When It's Quite Windy Out There, Bunker Holding Excels'

Bunker Holding CEO Keld Demant discusses the firm's positive outlook for this year in an interview with Ship & Bunker, after reporting the second-best profits in the company's history.

Siti Noraini Zaini has taken up the role as of July 18.