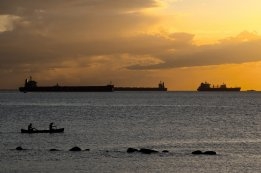 That Russian fuel oil has been indirectly finding its way into Singapore is the view of a marine fuels trading manager based in the southeast Asian bunkering hub.

"Prices for high-sulphur bunkers are competitive also because there are traders blending cheap Russian components, which allows suppliers to offer good value to shipowners," the trader was quoted as saying by local news provider the Straits Times.

The increase is reflected the port's monthly bunker sales statistics, the report added.

Citing Refinitiv data, 80% of fuel oil coming from western sources and going to Asia in October was made up of Russian barrels, according to the report.

Much of this material is reported to be held in deepwater floating storage. The trend will most likely continue ahead of the embargoes on Russian crude in December and Russian oil products from February next year, the report said.

The company is looking for candidates with fluent Mandarin and English and a maritime education or experience in shipping or bunkering.