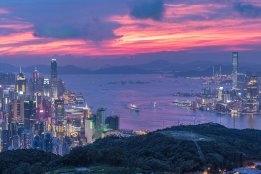 One of NewOcean Energy's executive directors has stepped down because the debt-stricken bunker supplier has decided to relocate its head office to mainland China.

Shum Chum has resigned as executive director as of December 24, the company said in an exchange filing.

The move is "due to his personal commitment and job relocation caused by the reallocation of the headquarter to mainland China which led to considerable inconvenience," the company said in the statement.

"Mr Shum has confirmed that he has no disagreement with the company and there is no matter relating to his resignation that needs to be brought to the attention of the shareholders of the company."

The firm announced in October that it was moving out of its main office in Hong Kong, keeping just a smaller registered office there to comply with local law and moving its headquarters to its regional office in mainland China.

NewOcean is currently going through a restructuring process aimed at keeping the company stable and operational while addressing its debts.

Goltens has been appointed as an authorised sales, installation, commissioning and after-sales service provider for the Emsys-iS Marine Emissions Monitor and Emsys-PM Smoke Density Monitor.