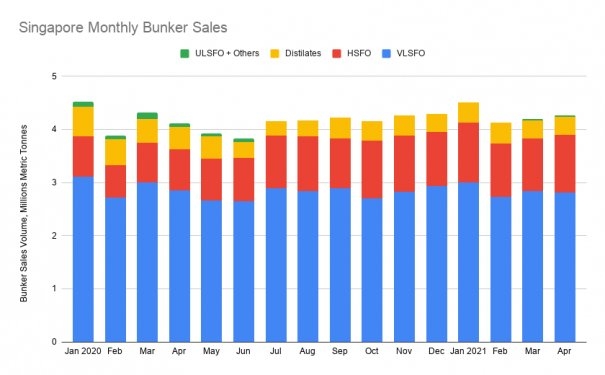 Bunker demand in Singapore, the world's largest marine fuels hub, advanced on both a yearly and monthly basis in April.

The city-state's total demand reached 4.3 million mt in April, according to preliminary data from the Maritime and Port Authority, up by 1.34% from the previous month and by 3.5% from April 2020.

The average bunker stem size was about 1,260 mt last month.

The yearly gain partly reflects the slip in demand seen in at the start of the COVID-19 crisis last year; April 2020's level was 4.8% lower than March 2020. Demand a year ago may also have been suppressed by shipping companies working through the VLSFO stockpiles they had built up during the IMO 2020 transition, rather than taking on new purchases. 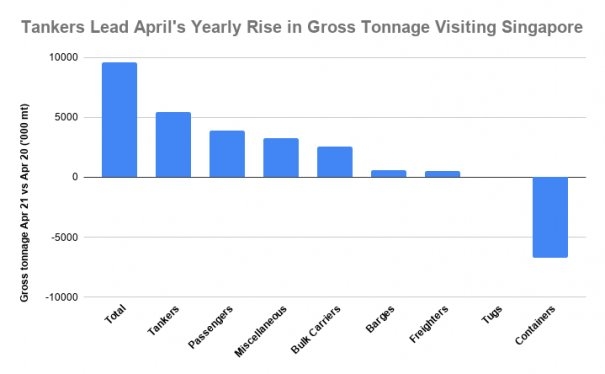 The total of gross tonnage visiting Singapore jumped by 4.2% on the year to 240 million mt. Tankers led the recovery, gaining 5.5 million mt, and passenger vessels also saw a strong 3.9 million mt rise, while the gain was pared by a 6.7 million mt drop in container ships.

Oil Mixed On India Fears But A Surge In Demand Is Looming, Say Experts

Baltic port's management include shore power as part of plan to be carbon neutral by 2050.

The firm has won a contract to supply LPG fuel supply systems to three Japanese gas carriers being built by Sasaki Shipbuilding.