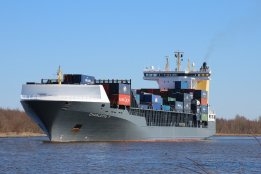 The regulation, in force from December 1, stipulates that ships that emit "visible black smoke" for three minutes and above will be punished, the Xinhua news agency reported.

In addition, incinerators are banned in ships off the waters of Qinhuangdao, under the regulation.

Priority will be given to the ships using fuel oil capped at sulphur content below 0.1% m/m in entry, load and unload, and departure of the port.

The number of merchant ships calling in and out of Qinhuangdao has reached 14,000 so far in 2019.

It is estimated that the 24-hour emission of PM2.5 pollutants by a medium-sized container ship is equivalent to the daily emission of 500,000 heavy trucks.

Still, signs suggest a trade deal and other positive developments are impending.

"The concern is that this is just the sign of things to come," says ClipperData's Matt Smith.