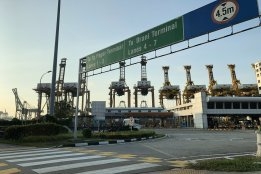 Bunker buyers should not worry as much about VLSFO avails in Singapore, or other major ports, says NSI's Paul Hardy.

With ongoing chatter about the potential for tight supply of IMO2020 grade fuel, Hardy says the supply risk will be a factor in the minor ports while the real risk in Singapore is logistics and specifications.

"The other key risk is that of pricing which can be managed by contracting against a liquid and tradeable index. Otherwise, sit tight and wait until the 0.50% indexes become tradeable. Don't pay a large premium basis there may not be any avails later on," he writes in NSI's latest 2020 Planning newsletter.

As previously reported, the Maritime and Port Authority of Singapore (MPA) says the country has 32 suppliers that plan to offer max 0.50%S VLSFO.

While initial spot indications for 0.50%S VLSFO are now being made, volumes are so low that it is difficult to know if these will be reflective of the market come Q4.

Another factor affecting prices is that some suppliers are still adjusting their VLSFO recipes and their final specs are yet to be confirmed.

This is also reflected in certain contracts now being offered in Singapore, which Hardy notes come with the caveat that certain parameters are not fixed which points towards multiple potential cargo sources.

"The key is to contract when you can control the full logistical chain i.e. product source, storage and barging as with an opaque market and various blends it is difficult to judge fair value of pricing," he says, adding that this is yet another reason to hold off making any buying commitments now.

"Nobody would go into a car dealer and put down a deposit basis the salesman guaranteeing it will have 4 wheels and a steering wheel, but you can't see it until it's delivered. The argument that you need a car and there might not be any by the time of delivery would not wash. Especially if all the manufacturers are telling you they are making lots of cars," he writes.

"In summary, if you are going to contract be as direct as possible in the supply chain if you really want to de-risk supply. That said, the premium you will pay will likely be above where the market will end up due to the opacity and lack of liquidity in the market."