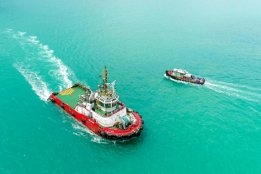 A future where waterways are plied by autonomous vessels moved a little closer this week.

Harbor tug Maju 510 became the first vessel in the world to receive the Autonomous and Remote-Control Navigation Notation from ABS classification society.

The vessel also became the first Singapore-flagged vessel to receive the Smart (Autonomous) Notation from the Singapore Maritime and Port Authority (MPA).

The awards follow a demonstration of autonomous collision avoidance capabilities in trials conducted at Raffles Reserved Anchorage, off Singapore Island, in March 2022.

Keppel Offshore & Marine (Keppel O&M) is the project lead for the autonomous solutions on the Maju 510, which is owned and operated by Keppel Smit Towage.

While fully automated ocean going vessels are still some way into the future, they offer clear benefits not only in terms of improved safety, but crew-less vessels are also more energy efficient as they can dispense with features such as lighting, heating, and other human support systems.

Sergi Calls has joined the firm as bunker purchase manager in Houston as of this month.

The terminal will have 1,000 m3 of storage capacity and is expected to come into operation in the first half of 2023.

The group aims to reduce greenhouse gas emissions from ships by about 15% via its vessel optimization platform.