Claritecs Getting Traction in Singapore with Digital Bunkering Offering 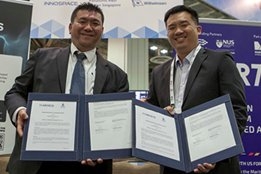 Singapore's Claritecs says it is gaining traction in the local market with its web-based digital bunkering service, BunkerMaestro.

The firm says its software can increase work efficiency by at least 30%, increase bunker tanker utilisation rate at least 15%, and halve the time spent on communication.

The system is among the first to use the Singapore Maritime Data Hub (SG-MDH) to, among other things, assist bunker operators reduce data entry and manual scheduling as well as provide clarity in bunker scheduling to ship agents.

The firm has also just signed an MOU with AIS service MarineTraffic as part of its drive to enhance the efficiency of bunker deliveries.

Bunker operators Sinanju Tankers Holdings, Sentek Marine & Trading, and Global Energy Trading are among local suppliers to have signed MOUs to testbed BunkerMaestro alongside their existing bunker scheduling workflow and with a view of potential adoption.

This buy-in from local players is particularly significant given that, despite various efforts over the last 20 years, the bunker industry has been infamously hesitant to adopt such technologies.

"BunkerMaestro has gained much traction and the momentum has now propelled us to ready it for commercial rollout. We firmly believe that BunkerMaestro will add value to Singapore's USD $25 billion bunker industry," said Wong.

Mitsubishi Shipbuilding, K Line and ClassNK have been working together on the project.

VPS business development director John Oosthoek discusses the changing nature of VLSFO and how to keep track of its quality.