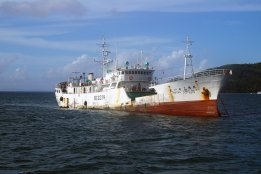 China plans to prohibit the discharge of wash water from open-loop scrubbers in its waters from the start of next year.

The move forms part of a draft plan to cover the implementation of the International Maritime Organisation's rule on 0.5% sulfur in bunker fuel, according to reports.

Ships fitted with open-loop scrubbers going east and to south China, in particular to ports in the Yangtze River and Pearl River deltas will need to switch to compliant fuels.

The draft implementation plan has been issued by China's Maritime Safety Administration (MSA).

It also states that from next year, vessels will be subject a 0.1% sulphur cap when entering China's inland water ECAs. The same limit will also be applied to waters around Hainan Island from January 1, 2022.

The public has until August 22 to provide feedback on the proposal.

China has long been rumoured to be considering such a ban, although officials were quoted in September last year as saying "China is not going to ban open-loop scrubbers, as long as they are in compliance with the prevailing regulation."

The expansion makes Dan-Bunkering's Dubai office its largest by number of traders.