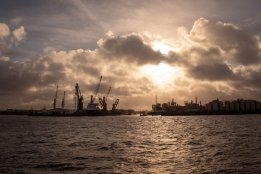 ARA-based Trefoil Trading BV has expanded its physical bunker supply operations to Hamburg, taking over the two barges previously operated there by Bomin.

The barges are owned by the Burando Group, which is also the parent of Trefoil.

"We are happy to expand our physical footprint and are looking forward to provide the port of Hamburg with an efficient, high standard bunker operation", Trefoil COO, Maurice Elfrink said in emailed comments.

"We know the Hamburg market well and have competitive sourcing agreements in place. We feel confident that we can add value to the local bunker market, for the benefit of the shipping community."

Bomin has yet to make an official announcement on the move and has been contacted by Ship & Bunker for comment on the implications for its wider operations.

Today's news comes less than six months after Bomin announced it was exiting two of its four "hub" markets to focus on a new strategy based around Houston and Hamburg.

Bomin was then forced to address rumours it was looking to exit the bunker business altogether, dismissing comments made in an internal email that "bunkering does not fit into parent Mabanaft's business model" as a misunderstanding.

More recently, the supplier has faced claims in the wake of last years "bad bunker" problems.

Contact details for Trefoils new operation is as follows:

The company has deployed two of its wholly owned barges, each with a capacity of 4,800 mt of fuel oil and 1,000 mt of gasoil, for the operation.

The ships are due to be ready to enter into service between March 2022 and March 2023.