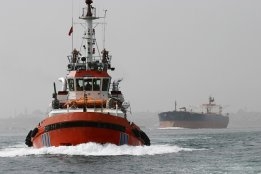 In a statement sent to Ship & Bunker, Danish bunkering company Dan-Bunkering refutes allegations made in a report by Danish media organisation DR that the company was involved in a breach of European Union (EU) sanctions on trade.

The statement asserts that Dan-Bunkering has not violated EU sanctions and that it has not supplied jet fuel or other products to Syria which would put it in breach of EU sanctions.

The statement details the company's comprehensive and robust compliance system which it says it stands by. The company confirms with certainty that it has not traded with sanctioned parties, according to the statement.

"When a fuel delivery takes place, a tanker (bunker barge) transfers its fuel to another ship. Subsequently, the captains on both ships sign a so-called "BDR" (Bunker Delivery Receipt) document to confirm the delivery," the statement reads.

"The destination of the ship appears from this legally binding document. None of the BDR documents related to the ships mentioned by DR stated ports in Syria as their destinations.

"An advanced compliance system ensures that the company does not deliver fuel to
counterparts on the official sanctions lists," the statement said.

The statement goes to say that the company regularly liaises with the authorities on relevant trading matters. It acknowledges contact between the Danish authorities and the company in late 2016 over an enquiry involving deliveries of fuel to Syria.

That query was answered in January 2017, and as far as the company was concerned nothing came of the matter, and it was not aware of any further interest on the part of the authorities, the statement said.

Dan-Bunkering said that until recently it was not aware that a police report had been filed against the company.

The statement ends by querying some of the factual information in DR's report.

"The company cannot publish names of any customers, but the company regularly presents documentation of customer relationships to the relevant authorities in confidentiality. Furthermore, from this documentation it appears that DR's coverage is subject to a number of factual errors in terms of times, places, ship names," it said.

The focus on Dan-Bunkering's trading activities emerged earlier this week following the publication of DR's initial report which alleged that a 30,000 metric tonne cargo of jet fuel had found its way to Syria.

The report also refers to an investigation by the US authorities in 2018 into money laundering and sanctions breaches in relation to Syria. As regards the US investigation, Dan-Bunkering said: "Dan-Bunkering is not a party to this case but has contributed to the elucidation of it."

The accounting firm will help oversee the company's finances and negotiate with creditors.

S&P 500 Index leaps upward due to optimism of end of pandemic.