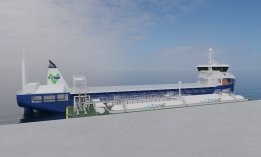 A project seeking to build the world's first ammonia bunker terminal in Norway has been awarded NOK 89 million ($10.3 million) of government funding.

Azane Fuel Solutions will be granted the funds through the Norwegian Green Platform Initiative, it said in an emailed statement on Friday.

Azane Fuel Solutions is a JV formed by Norway's ECONNECT Energy and Amon Maritime in July. The company said in an emailed statement on Friday. The firm will seek to build both shore-based and floating ammonia bunker terminals, with the Northwest European market a likely early focus.

"We are removing the famous chicken-and-egg dilemma for new fuels," Andre Risholm, chairman of Azane Fuel Solutions, said in the statement.

"Now we will start building the bunkering network."

Last month 45% of ton-mile demand for VLCCs was met by scrubber-equipped tonnage, up from 39% in October 2019.

"This is a feasible solution that will support our journey towards net zero carbon shipping," says BV's Matthieu de Tugny.