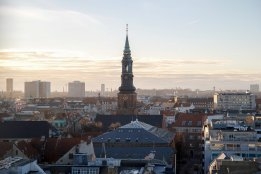 The first shore power facility at Copenhagen has come online.

The new facility was inaugurated on Tuesday, the port authority said in a statement on its website. The service was developed in partnership between ferry company DFDS and Copenhagen Malmo Port.

"We are taking an important step towards a Copenhagen with less air pollution," Lars Weiss, Lord Mayor of Copenhagen, said in the statement.

"It is good for both the climate and the neighbours of the port that the ferries can now turn off the diesel engine and connect to climate-friendly electricity when they dock.

"I also look forward to establishing shore power for the cruise ships at Langelinie and in Nordhavn, as soon as Folketinget has changed the legislation."

The current facility is for the use of DFDS ferries, but a new facility for cruise vessels is planned by 2024 at Ydre Nordhavn and at Langelinie in Østerbro.

EVENT: Explore the Outlook for the Bunker Market in Europe & the Mediterranean