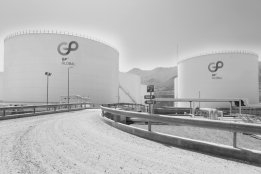 Oil trading firm GP Global, which is being restructured following a financial upheaval in 2020, has sold its Fujairah bunkering terminal for $124 million.

Restructuring company FTI Consulting, now running GP during its restructuring process, sold the terminal to Mount Row for $124 million at the end of May, a source familiar with the transaction told Ship & Bunker.

The proceeds from the sale have already been distributed to GP's direct creditors in Fujairah, principal among which is a group of eight banks led by UAE-based Emirates NBD, and a later distribution will be made to holding company creditors.

The Fujairah terminal has 412,000 m3 of storage capacity, with 17 product tanks and two utility tanks, and can handle fuel oil, gasoil and cutter stock. The terminal was historically handling as much as 7.4 million mt/year of refined product deliveries, of which a large share was marine fuels.

Funds for the purchase of the terminal are understood to be ultimately owned by Delaware Life Insurance in the US. Delaware Life did not respond to a request for comment.

But the gains are accompanied by more signs of waning demand.

China's January-June VLSFO exports were 9.09 million mt, down by 7% from the 9.81 million mt seen in in the same period a year earlier.