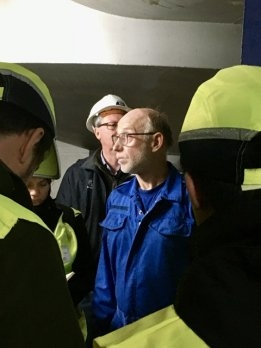 The equipment, one of the first to go on a DFDS vessel, means that the ferry can continue to burn high sulfur fuel oil as pollutants are removed from the ship's exhaust by a washing process.

The equipment was retrofitted during the ship's downtime with monitoring systems, extra piping and an extended chimney stack all part of the installation process.  Bar a few teething problems at the outset, it has proved to be reliable and efficient. The installation of the scrubber on the ship saw no loss of cargo space.

Espesen, who has been part of Freesia's 21-strong crew for three years, said operating the equipment is the responsibility of his five member engine crew and part of their daily work routine.

"We've had no problems with the machinery," Espesen explained to a group of visitors (including Ship & Bunker) to the ship when it was working cargo at the Belgian port of Ghent.

Freesia Seaways plys the route between Ghent and Gothenburg in Sweden which means it travels through an emissions control area where the sulfur content of bunker fuel is capped at 0.1%. Operating data from the scrubber is streamed ashore for analysis and to meet data requests from other authorities.

DFDS managers say that with a fixed-point service-- which includes the Freesia route -- there is no difficulty in sourcing high sulfur fuel oil even though the fuel is expected to become less readily available from the start of IMO2020 next year.

Of the 59 ships in the DFDS fleet, 37 have scrubbers installed.

Anemoi Looks to Bring its Flettner Rotors into Global Market

The approval will allow the systems to be installed on CCS class vessels without further emissions testing.