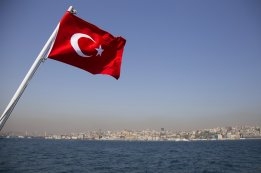 Turkey has clarified its position on scrubber washwater, saying it cannot be discharged legally in its waters. File Image / Pixabay

Scrubber advocate group the Clean Shipping Alliance has registered its disappointment at the news of Turkey's ban on the discharge of scrubber washwater in its territory, saying it incorrectly interprets this water as a pollutant.

As Ship & Bunker reported on Monday, Turkey has clarified its position on scrubber washwater, saying it cannot be discharged legally in its waters. Scrubbers remain legal to operate in Turkey for those ships capable of storing their washwater for disposal elsewhere.

"Wash water from exhaust gas cleaning systems should not be interpreted as a form of marine pollution," Mike Kaczmarek, chairman of the Clean Shipping Alliance, said in an emailed statement on Tuesday.

"These systems have been in use for decades and there is absolutely no evidence of any negative impact on marine life or sea water quality, neither in open waters nor in port environments.

"We realise that the Ministry may have elected to take this step as a precaution, and we have reached out as a partner to work with the Turkish authorities, and to share the available science and data.

"But this is an important step, and will impact many ship operations."

The company is looking for candidates with at least five years of experience of a bunker trader.

Gibraltar does not release official figures for bunker sales volumes there, but its total is estimated to have been flat on the year in 2020 at about 4 million mt.