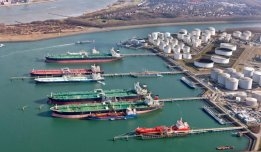 The Europoort terminal plays host to some of the world's largest oil tankers. Image Credit: Vopak

Ships loading and unloading cargoes at the terminal can now take LNG bunker deliveries by barge at the same time, the company said in a LinkedIn post.

"This eliminates the shifting time and reduces expenses for LNG-powered vessels for their bunkering," the company said.

LNG bunker sales at Rotterdam have been increasing rapidly in recent years. In the second quarter of 2020 natural gas sales there totalled 58,522 m3, up from 35,190 m3 in the previous three months, according to data from the Port of Rotterdam.

Mustafa Muhtaroğlu, CEO of local supplier Energy Petrol, is due to talk about the Turkish market and the wider bunker industry at the IBIA Annual Convention 2020 in November.