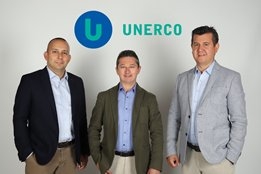 A breakaway trio from Turkish supplier Arkas Bunkering have officially launched Unerco Petroleum, a new physical bunker business in the country with offices in both Istanbul and Izmir.

Co-owners Ufuk Erinc (CEO), Erdem Coker (Head of Commercial) and Utku Unlu (Head of Supply) will be assisted by a team of seven others and says it has backing from a consortium of international financial investors.

The company was granted a physical supply licence on June 27 and will commence deliveries "soon" using its own leased tanks and dedicated chartered-in tonnage.

Unerco also has ambition to act as a global trader.

"As a team, we have achieved the status of being the top supplier in Turkey for almost a decade. However, our motivation, ambitions and mindset is looking beyond national borders," Erinc said in a statement released today.

"We are proud of our achievements, but resting on the past is not our style; we want to create a global leader in bunkering out of Turkey and for that we had to establish the right platform."

Total demand at the world's largest bunkering hub fell to 3.925 million mt in May, down by 2% from a year earlier and by 4.6% from the previous month.

But fears of a return to Covid lockdowns still persist.