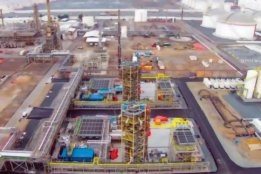 Last month the firm announced it would be selling off Uniper Energy DMCC as one of the European Commission's conditions for approving its bailout by the German government under EU state aid rules. The deadline for completion of all of the company's divestments is the end of 2026.

Uniper Energy DMCC has two production trains at a plant in Fujairah producing more than 4 million mt/year of 0.1% and 0.5% sulfur bunker fuels. The plant is a key supplier of VLSFO to the bunker market in the Middle East, along with Vitol's 80,000 b/d Fujairah refinery.

Uniper's Middle East bunker operation also trades cargoes of these fuels to the Middle East, ARA and Asia-Pacific regions from a trading office in Dubai.

The company has additionally been running a partnership with biofuel supplier Neutral Fuels since 2020 to develop biofuel-VLSFO blends for the bunker industry.

"Any likely buyer would need the financial wherewithal to pay for, and experience in running, a decent-sized refinery," Jason Silber, lead analyst and head of business development at Infospectrum, told Ship & Bunker.

"If I had to guess, the large commodity houses, oil majors and national oil companies come to mind, but there are certainly other candidates.

"Vitol, however, already has a refinery in Fuj so I'm assuming it might not be as interested.

"But you never know -- someone more unexpected may also want to jump in."

Historically the bunker industry has largely shunned the ownership of its production assets, preferring to take fuels from large oil companies and sell them on to shipping customers. Owning a refinery requires expertise in all of the product markets that the plant would supply -- not just bunkers -- and in the pre-IMO 2020 era an expansion of focus to that scale would have seemed excessive just to secure preferential access to HSFO production.

But in the VLSFO era a small refinery like Uniper's can be much more focused on low-sulfur bunker production, making the asset more attractive to the bunker industry.

The traditional candidates to take on an asset of this kind would be the large commodity trading firms with an interest in the bunker market: Vitol, Trafigura and Mercuria would be the most obvious names.

Vitol was named as showing an interest in the refinery late last year when Uniper was considering a sale before the EU's decision. Local market sources contacted by Ship & Bunker also named Vitol as a likely contender, as well as Mubadala Investment Company.

The timing of this sale may prompt interest from other firms in bunkering.

But the timing of this sale may prompt interest from other firms in bunkering. The larger names in the bunker industry in general are cash-rich after record margins in 2022, meaning owning a production asset may be within reach financially for some for the first time.

Bunker Holding physical supply subsidiary Bunker One is the conventional bunkering company with the closest connection to production assets at present. The firm has a deal with US-based Vertex Energy, in which it holds a small stake, giving it the right to purchase up to 100% of the marine fuel produced at its Marrero and Mobile refineries.

Maersk Oil Trading, the bunker supply arm of container and logistics firm AP Moller-Maersk, has also expressed an interest in producing its own VLSFO blends in the past.

Refining assets look a strong investment at present after two years of strong crack spreads following the COVID-related crude crash in 2020 and the strength in middle distillates since the war in Ukraine broke out last year, and now could be as good an opportunity as the bunker industry is likely to get to buy one.

But in an era when most firms are looking ahead to a decarbonised future beyond fossil fuels, will anyone apart from the largest commodity traders want to take a punt?

MPA officer Tan Hanqiang, first secretary for maritime at the High Commission of the Republic of Singapore to the United Kingdom, has been appointed vice-chair of the MEPC as of December 16.