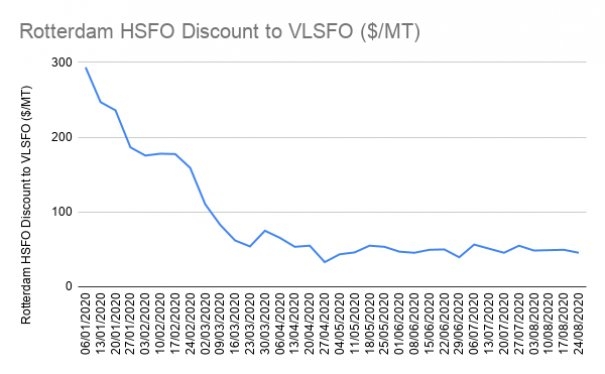 High-sulfur fuel oil (HSFO) prices in Northwest Europe have returned to the level they were at before this year's crude collapse in March.

In Rotterdam 380 CST HSFO was trading at $270.50/mt on Monday, according to Ship & Bunker pricing, the highest level since March 6.

Crude prices started to collapse this year on March 9 after a falling-out in the OPEC+ coalition between Russia and Saudi Arabia over production levels. The move was soon followed by a dramatic fall in bunker prices.

VLSFO prices have been kept low by generally weak demand for middle distillates, while some strength has been lent to HSFO by output cuts in Russia and demand for the product from US refiners for use as a feedstock.

This has narrowed the VLSFO-HSFO price spread, a key measure of profitability for those shipowners that invested in scrubbers. The spread at Rotterdam narrowed to just $45.50/mt on Monday, the lowest level in a month and compared with one of $298/mt at the end of 2019.

Leaked oil from sinking minimal according to Tunisian minister.

The company saw an improvement in both revenue and profits in the first three months of the year.