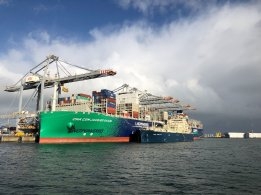 A total of nine LNG bunker barges now operate at the Port of Rotterdam, the port authority said Thursday.

Of those nine ships, three of them operate at Rotterdam on a permanent basis, the Port of Rotterdam said in a statement on its website.

This week has seen the bunkering of container line CMA CGM's giant new gas-powered boxship the CMA CGM Jacques Saade at Rotterdam, which is likely to bring with it a surge in LNG bunker demand at the Dutch port.

This is the first in a series of nine 23,000 TEU ships ordered by the French liner. Once all nine are in operation, they will be bunkering 300,000 m3/year of LNG at Rotterdam, the port authority said.

That compares with the 139,686 m3 of LNG sold at the port in total in the first three quarters of this year.

"Like CMA CGM, we support the transition from heavy fuel oil to liquefied natural gas (LNG) as a transport fuel for shipping," the port authority said.

"At present, LNG is the cleanest fuel that can be considered scalable and affordable for this ship category.

"Moreover, the introduction of these new LNG-powered vessels supports the Port Authority's ambition to serve as a key hub in the import, export, storage and bunkering of LNG."

Mercuria has agreed to buy a 61% stake in US alternative fuels supplier Beyond6.

The NewOcean 6, operated by Palmstone Tankers & Trading, will need to review all its procedures before it can resume operations.