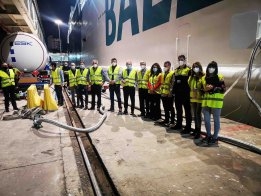 The Bahama Mama was retrofitted to run on natural gas earlier this year. Image Credit: Balearia

A ship owned by Spanish ferry operator Balearia has undergone the first LNG bunker operation at the port of Almeria, the company said this week.

Balearia's ship the Bahama Mama was bunkered at the port on Wednesday, the company said in a statement on its website.

The operation was carried out with trucks by gas supplier ESK, in coordination with the Almeria Port Authority.

The Bahama Mama was retrofitted to run on natural gas earlier this year. The ship operates between the Spanish mainland and the Balearic Islands.

By 2021 the ferry operator plans to have nine gas-powered ships in operation; three will be newbuilds and the remaining six retrofitted.

The vessel to be supplied with the alternative bunker fuel is a new, zero-emissions ship which is expected to handle daily consumption of around 1,000 kg.