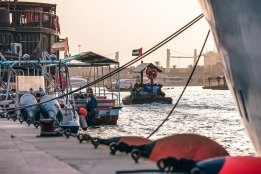 The prospects for the use of biofuels as marine fuels in the Middle East may be boosted by reports that UAE oil company Abu Dhabi National Oil Company (Adnoc) is to trial biofuel for use by its fleet.

The move is being organised through one of its subsidiary companies, the oil company has said.

"We're studying with one of our subsidiary companies the usage of biofuel," Captain Abdulkareem Al Masabi, chief executive of Adnoc Logistics and Services, was quoted saying by local news provider The National.

Offshore support vessels are being used in the trials the results of the which are expected to be released this year.

The company is also considering other forms for alternative bunker fuel, such as liquefied natural gas, for its fleet, according to the report.

Adnoc complied with the IMO 2020 regulations on bunker fuel for its fleet from November last year. The rules limiting the sulfur content of bunker fuel were in force from the start of this year.

The company is currently active in West and South Africa, it said.